The day before yesterday my step-dad Joe, Gavin, and I went to Nuremburg. We hopped a commuter train from Ansbach to Nuremburg. Gavin had never taken a train in Germany before so it was pretty exciting yet at the same time uneventful for him.

When we arrived at the Nuremburg Hauptbahnhof (German for Central Station) we were shocked to see that McDonalds not only sold Bubble Tea but Twilight Bubble Tea!  I sadly did not get to choose between Edward and Jacob Bubble tea’s because we quickly left the Hauptbahnhof to find some breakfast.

On the top floor of a department store my dad found a place for us to eat breakfast.

Gavin and I did not eat anything because we were holding out for the goodies at the Christmas Market. Gavin and my dad shared a special Christkindle Markt bier for breakfast while I drank soda water (which is really popular in Europe, regular water is few and far between).

The Christkindle Markt was really exciting. The Nuremburg Christmas Market is the largest one in the world and the second you walked into it you could tell. Apparently vendors have waited for up to 30 years to be able to sell their products at the market.  For the most part there was a lot of the

same things, wool hats, baked goods, hand made toys, and lots of German food.  At noon we watched the Glockenspiel  ( a giant clock in a church) ring with carved characters elaborately dance around the clock.

In the photos below:  1) my step dad is holding Schaschlik, some kind of boiled meat covered in curry and other sauces.  2) Gavin is eating a pickled Sardine Sandwich 3) I am eating a Dutch Heart Shaped Waffle 4) Gavin is drinking Glühwein which is warmed sweetened red wine, a classic christmas drink in Germany. 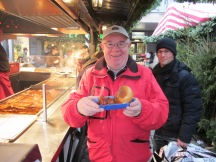 Later we visited the Castle in Nuremburg, then went to the Albrecht Dürer Museum. The museum was cool enough, i think it was made in the house he lived in while he created his works.  The only thing was the audio guide we listened to was terrible.

Instead of describing anything in the carefully maintained home of the artist, we listened to his wife complain about daily life and the people Dürer worked for.  After the Dürer Museum we went to the Nuremburg Trial memorial. Unfortunately the court room where the trials took place was in use. The rest of the memorial was very……heavily  dense with text. Which was all in German. So we had to listen to the entire thing on an audio guide which was very long.  Before we got through the entire exhibit we had to leave to catch our train back to Ansbach. I wish we were able to spend more time at the exhibit and see the court house but I guess that will be for another day.

Our day was very long and very tiring but it was exciting! We look forward to going to Rothenburg tomorrow (AT LAST!!!)