I have never been to Brussels before and neither had Gavin. We had no idea what to expect especially since we knew absolutely nothing about Belgium. When we got off the train we immediately learned something: The official languages of Belgium were French and Dutch. Everything from advertisements to street signs were in both languages. 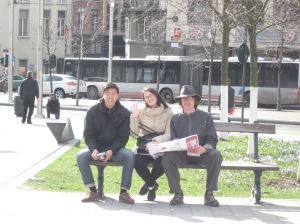 We stayed in the 2GO4 Hostel, which was close to the downtown core. When we checked in we met Jordin (who is from Vancouver) and Amanda (from Ireland). They had just come back from a day trip to Bruges, a place they urged us to visit. They mentioned how they were going to a brewery tour the next day and we decided to join them.
They next day we woke up and wanted Belgian Waffles. Gavin and I wandered downtown Brussels and found amazing waffles then went back to the hostel so we could leave for our beer tour.

At the Cantillon Brewery

We went to the Cantillon Brewery, a traditional family run brewery of Lambic beer. What is interesting is that in Germany the ingredients and the method of producing beers is protected; whereas in Belgium it is not. This makes it difficult to distinguish the difference between large scale industrial production of Lambic beer and the traditional way produced by the Cantillon brewery.

After paying €6 we were given a detailed handbook of how the beer is brewed. We were given free run of the entire brewery ( which had ended this years production the day before we arrived). After the tour we got to enjoy a sample. Lambic beer is very bitter, and non carbonated, making it more of a cereal wine than a beer. When its allowed to re-ferment it becomes bubbly, called Gaseuz. It is still quite sour, but I tried some fruit beer which was better but still bitter to a non-beer drinker. While we were sampling we learned the brewery also made their own cheese. The cheese was a mixture of milk and beer, and tasted amazing. Later that day after walking around Brussels for a while, the four of us enjoyed more Belgian waffles and beer.

The next day Jordin and Amanda checked out of our hostel and Gavin and I went on our day trip to Bruges. Our Hostel had these amazing free maps for young people and gave us a map of Bruges to give us an idea of what to do. The maps tell you what the locals do and all the cool places to go without any advertising. It even offered information for self guided walking tours.

Bruges is an old style town with cobbled streets and canals. We wandered past old churches and hospitals dating from the 17th century. Horse drawn carriages would go by us every ten minutes or so, something that really added to the old town feel of Bruges. Gavin and I watched live candy pulling at Zucchero, a homemade candy store filled with amazing lollipops and candied treats. We ate our first Belgian Chocolates, Pralines from Leonidas followed by Belgian Frites, the original French fries. We then took a boat tour ( in the rain) of the canals. When we finished our canal tour we hurried back to Brussels and out of the rain.

The next morning we had a train to catch to Amsterdam but we still wanted to checkout one more site in Brussels: The Atomium ( google it, this thing is weird). We did not know anything about the Atomium, other than it was a model of an iron atom, and we assumed it was no bigger than maybe a couple meters in height. We were so wrong…. At a height of 102 meters weighing in at 2,500,000 kilograms, The Atomium was built for the 1958 Worlds Fair. It has 9 giant orbs (three of which you cannot enter and one for special events). Once inside the Atomium you could view exhibits in four of the spheres then take an elevator to the top sphere viewing deck. The first sphere talked about the 1958 Worlds Fair. The next two spheres were a bit more confusing we weren’t sure if it was talking about fonts on the front of buildings built in the sixties or an old newspaper that folded or the destruction of that newspaper or social housing with the same name. The last sphere had a space for children to have sleep overs in. After our tour of the orbs, we took the elevator to the top viewing deck. It was nothing special (especially since we just saw the viewing deck from the Eiffel Tower). We saw Little Europe, a miniature version of the best known sites in Europe, that is next door to the Atomium. We did not go to Little Europe, as we were too busy exploring Big Europe. I have a feeling the food is better at ours.

After seeing the Atomium we caught our train to Amsterdam!