Amsterdam is one of my favourite cities. To many Amsterdam is known for two things, marijuana and prostitutes; to me it is a warm and welcoming city with friendly people and beautiful infrastructure. I have been to Amsterdam twice before with my dad and loved every time I visited. This visit was my first without my dad and Gavin’s first visit ever.

When we arrived in Amsterdam like most places we have visited we really didn’t know what to do or where to begin. Since we were in the city for six days we decided to use our arrival day as a day to relax. The next day we planned on doing a free tour at 11am. Unfortunately it was pouring rain so we declined the tour but waited to do the 1pm tour. Unfortunately, Gavin and I were boneheads and tried to find the meeting place without a map and failed to find the location. We spent our first full day wandering the streets. Our second day in Amsterdam we were determined to finally go on our tour.

Our free tour was given by a peppy British girl named Stephanie. Stephanie was very informative and showed us the former headquarters of the Dutch East India Company, the infamous Red Light District, hidden Catholic Churches, the worlds first stock exchange, Multatuli’s giant head, Anne Frank’s House and the Jewish Quarter. We also saw the widest bridge and skinniest house. At the end of the tour we were invited to enjoy some local Dutch cuisine, Stampot, which is a sausage on top of mashed potatoes with cheese and carrot and gravy mixed in. From here we signed up for the Red Light District and bike tour. Gavin signed up for the Coffee shop tour. 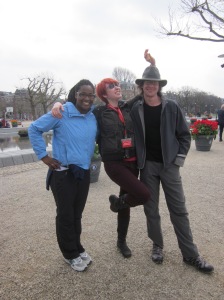 With Our Tour Guide Lee

Later that day we went on our red light district tour. We were particularly interested in the tour because we wanted to learn the history of Amsterdam’s most controversial neighbourhood. Our tour guide Lee was amazing. The best tour guide we had in a long time. Lee lived in the Red Light District and knew a lot about the people and what was going on, so she was able to answer any and every question we had. As many of you know prostitution is legal in Amsterdam and treated as a freelancing business but is kept strictly in the red light district. The sex workers are able to work legally and have protection from police officers making the roles of pimps and drugs almost nonexistant.The strangest thing was that the main concept of the area was for the workers and their patrons to maintain a sort of anonymity yet the workers stood in windows under red lights posing in underwear. The most interesting thing about the area was that the European Union wanted the space to be gentrified so the Dutch government was paying up to €5 million Euros for a single building to display fashionable clothing in the window instead. It was educational to see such a controversial space especially with such an amazing guide. I think the best thing about Lee was that she took us to a pub and didn’t ditch us after she got commission like every other tour guide we had from Sandemans. We hung out with a couple of cool Australians and had a pretty good night. 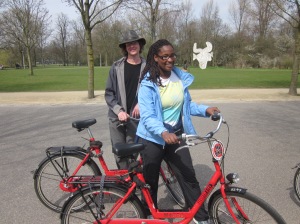 The next day we went on a bike tour with Lee. I really wanted to do a bike tour in Amsterdam because the Dutch are such avid bike riders. The bikes they ride in Amsterdam are generally heavy land cruisers which are much different from the light mountain bikes we ride at home. When Gavin and I got our bikes we wobbled a lot because we hadn’t ridden bikes in a long time and also because we were not used to the heavy cruising bikes.

The bike tour took us across the many canals and to parts of Amsterdam tourists don’t usually see. We rode our bikes through Amsterdam’s Central Park, Oosterpark, past the last windmill in the city, De Gooyer Windmill, the Amsterdam Zoo ( where we saw giraffes and zebras), the Rijksmuseum, and the Heineken Brewery. At the Rijksmuseum we wanted to take a picture in front of the famous “I AMsterdam” letters, but the sign had been moved apart during a royal celebration. After the bike tour we met up with our Australian friend from the night before and her friend Neil from Scotland and we had a double date.

On our last full day in Amsterdam we wanted to accomplish every tourist thing on our list. First we went to Reypenaer, a family owned cheese store, and did a wine and cheese tour. We sat at desks and learned about how cheese was aged, how different aged cheeses taste, and then we were able to try each of the five cheeses they aged. We discovered so much about different cheese it was tasty and awesome! My favourite was the Chèvre which is like goat cheese.

Gavin then got a straight edge shave from a barber down the road from the cheese place. After the shave Gavin went on to do the “coffee shop” tour and I went shopping.

After Gavin’s tour we met up and did a one hour canal tour on a long boat. The tour was comfortable and informative with a prerecorded tape describing all of the sites supplemented by the driver giving us local details about the surroundings. We finished the canal tour in front of Anne Frank’s House, the last tourist stop we wanted to see. I had been to Anne Frank’s house before and every time it fills you with so much emotion. I haven’t read the book in 15 years but her hopes and dreams quickly rushed back as we walked through the house she went into hiding in. When we finished the tour our last night in Amsterdam came to an end.