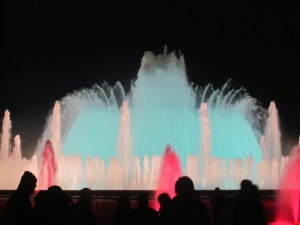 On our first night back in Barcelona we decided to save money by buying food to make dinner. The hostel we were staying in had two kitchens side by side with two large fridges for food. We went to the local grocery store and bought some quick pasta with pesto, fajita mix, and some breakfast foods. We found some bacon that was kind of like home, except that it was in little cubic strips. We picked up the bacon and headed back to the hostel to make dinner. After some yummy fajitas we went to see the Font Mágica de Montjuïc, the Magic Fountain located at the former central pavilion of the World Fair in 1929. Leading to the fountain on both sides of the street there were mini fountains that were lit up for almost 200meters. Once you reached a set of stairs leading to the Fountain and more stairs leading to the former pavilion and current Museum of National Art. Between the steps leading up to the pavilion there was a waterfall of water with lights, it was so pretty and looked like diamonds falling in the water,

The Fountain was quite large, about 15 meters across. When the show started an array of light and different water lit up and danced to music; it astounded us. Look up a YouTube video of it, Magic Fountain Barcelona, it was really cool! Afterwards we walked towards the Arenas de Barcelona which was a shopping mall that used to be a bull fighting arena called the Neomudéjar bullring, the facade of the building was preserved and the inside was gutted and made into the shopping mall. We took an elevator to the top of the building where there was a lookout surrounded by restaurants. The strangest thing about being on the rooftop was that all of restaurants were pretty inexpensive. We looked over the city; all of the important buildings in the city were illuminated: the Sagrada Familia, the Agbar Tower, and the Museum of National Art. We took in the night scenery and headed back to the hostel.

Our new hostel was kind of downtown but difficult to get to. It was spacious to the point that it seemed almost wasteful. Our first night was spent in a private room with high ceilings and balcony access. I didn’t get much sleep because there was a restaurant downstairs that was banging and making a lot of noise followed by a bright light shinning through the skylight above the bedroom door. The next morning we switched to a different room. The second I walked into the next room my heart sank. The room reeked of sweat and body odour. There was a window in the room but you could not open it. Suddenly I was exasperated at the idea of having to spend another night sleeping with random people. 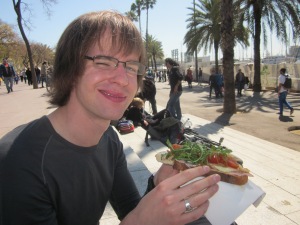 Gavin coaxed me into leaving the hostel and seeing the Arch of Triumph. From the Arch of Triumph we walked down towards a beautiful park. From the park we found ourselves at the Barcelonetta, beach front. We ate crepes, tosta’s and drank Sangria while watching a mime and magic show on the beach in the sunshine. After a long day of wandering we found ourselves back at the hostel. I sadly crawled to bed to share a room with 6 smelly men and to a surround sound chorus of snoring. The only way to make the room not smell awful was to have the air conditioning on which was not pleasant.

The next day I was rudely awoken with bright lights and loud chatter from the men in the other beds, who to my happiness were checking out that morning. After they left the room Gavin and I opened the bedroom door to try and air out the room. After making a yummy breakfast of Spanish bacon bits and eggs we headed off to the Park Güell.

The Park Güell was an urban park that was originally supposed to be a housing development. The famous architect Antonio Gaudi (he designed Sagrada Familia) had designed a home for the development and he lived there until his passing. The house is now a museum created in his honour. The park features a glorious entryway in Gaudi’s style with his famous dragon greeting you on the steps. We climbed to the top of the park where we could get a fantastic view of Barcelona.

When we returned to our hostel we were greeted by Australians in our hotel room. We were excited because up until this point anytime we met Australians we were greeted with an upbeat attitude and friendliness. This did not happen. Although thankfully the Australians were not smelly they were loud and obnoxious. We told them we were going to bed and they took this as a cue to leave….then come back and party. We were annoyed because we had a 6am wake up call for a train out of Barcelona. When we woke up the next morning we were so worn out from being with people we were excited to be off to Port Aventura.