A couple of days ago we did a day trip to the city of Bamberg with my cousins Melissa and Flo. Bamberg is known for being the beer capital of Germany. We intended to go on a couple beer tours and just have a day of fun but unfortunately in Bamberg you could only do the beer tour if you did all of the breweries and a tour of the city which would have been very long and tiresome so we decided we would do our own beer tour.

The first place we went in Bamberg was to the famous Dom Cathedral which despite the name did not have a dome. It wasn’t anything special, just another elaborate cathedral that had stood in the same spot for a thousand years (which is impressive). We did a quick walk through.

Next we went into the Bamberg Museum which was free on the day we visited. The Bamberg museum was probably the worst museum I have ever been to.  The museum was filled with different aerial maps of Bamberg. To express how little the museum had, one of the main pieces was a rod from a bridge that broke…Safe to say I did not take any pictures at this museum.

After the museum we went to the restaurant portion of a 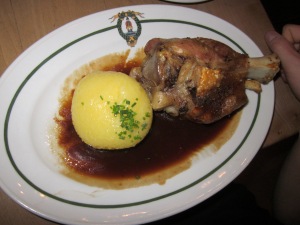 famous Bamberg Brewery, Schlenkerla, which is known for its Smoked Beer. We sat down in the restaurant and found there was nothing but red meat and potatoes so Melissa and I didn’t order anything. Gavin and Flo ordered the Schlenkerla house special which was a gigantic slab of meat (pork leg I think) and a knödel in gravy. Gavin ate  the entire thing in fifteen minutes, then ate Flo’s slab of meat. Then he drank  an giant glass of smoked beer.

Next, we went to a restaurant/ brewery next door so Melissa and I could eat, I got a classic Schnitzel with fries and Melissa got a salad. Gavin decided he would have the Beer sampler.  Which consisted of three different types of beer. He also ordered Beer Punch which was hot beer with sugar (apparently it tasted good).  After that restaurant we wandered around Bamberg. Gavin bought two six packs of the Smoke Beer (which weighed 25lbs!). We decided we would go to one more bar so Gavin could taste more Bamberger Beer.

We went into this hole in the wall pub which actually looked very nice on the inside. we sat next to a hearth and Gavin ordered  the beer to end all beers: Gaas Moos, one litre of Beer, cola, and a bunch of different liquors in one mug.

After tasting 6 different types of Bamberger beer, Gavin felt it was a good time to go home.

Here is a gallery of Gavin’s Beers from the trip: 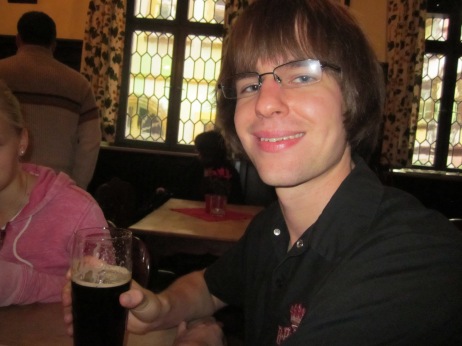 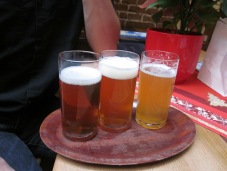 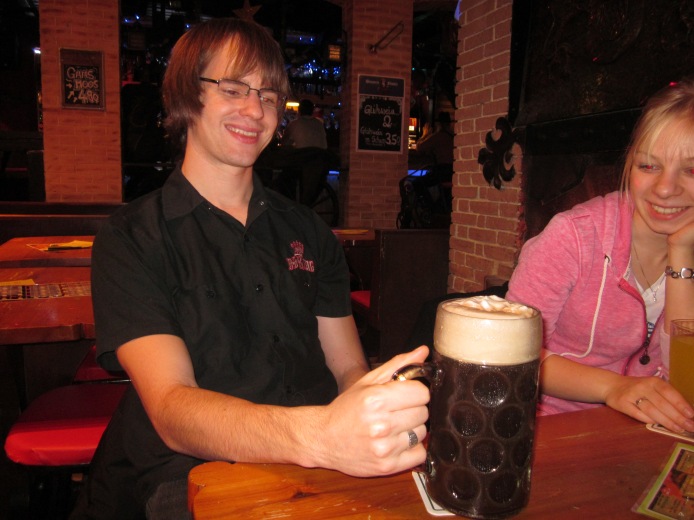